Creating Album Art for “Out of Place”

When I created the album art for Out of Place, the third album in the series Another Place, I wanted a visual counterpart to the theme that ran through the music: that finding yourself in a new, strange environment can be disorienting, but that can be a good thing, allowing you to escape old ruts you’d gotten into and letting you see things from a new angle. 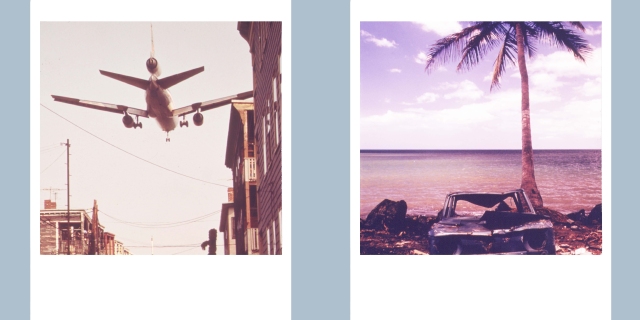 I was looking for images the were reminiscent of travel snapshots, but that often involved odd juxtapositions, and that encompassed possibilities that were sometimes inviting and sometimes uncomfortable.

I also wanted them to combine the everyday feeling of family photos taken on holiday with a sense of the extraordinary, the dreamlike. The first factor led me to frame the images like old-time Polaroids, while the second guided the selection of images and the way I tweaked their framing, color, contrast, and other elements, to give them the kind of surreal edge that can come when you’ve been driving just a little too long on a hot desert road.

Out of Place is available on my Bandcamp page, as are my other three albums.

This entry was posted in Uncategorized. Bookmark the permalink.